Having languished in development (hell?) for the past year, Icehill and Chillingo’s eagerly anticipated horror epic finally sees the light the day. Yet incendiary levels of pre-release hype, fuelled by a steady trickle of jaw-dropping screenshots and teaser trailers which seemingly billed Vampire Origins as being iPhone’s answer to Devil May Cry, just might have allowed the game’s legend to get too big for its boots.

And, perhaps inevitably, the end product crumbles under the weight of expectation. Rather than being the balls out gothic actioner many (myself included) were hoping for, Vampire Origins is instead a ploddingly paced and often tiresome trek from one dusty old survival horror cliché to the next.

Taking inspiration from genre classics such as early entries into the Resident Evil franchise means we get sumptious pre-rendered backdrops, an engrossing plot and, of course, gallons of gore, but also those “this door is locked find the key” gameplay devices, shifting statue puzzles and plenty of traipsing back and forth between déjà vu inducing environments that have been survival horror staples since the year dot.

Still here? Then I’ll start with the positives: The game really is beautiful; its dilapidated gothic churches, grimy dungeons and mist shrouded cemetaries are stunningly realised, while the cinematic camera angles and dynamic lighting effects help set an unnerving tone and give the title an appropriately creepy atmosphere.

Character models are equally well done. The diverse roster of blood-thirsty enemies, ranging from agile little suckers and hulking great brutes to swarms of swooping vampire bats, all are wonderfully detailed and well animated. Vincent himself is an engaging protagonist, replete with heroic swagger, tragic back-story (told through comic book cut-scenes) and dressed to kill in tried-and-tested vampire hunter garb (a Stetson and trench-coat combination – might want to lose the cheesy porn-star ‘tache though Vin).

In short, Vampire Origins is most definately a winner in the style stakes. And it’s really only when a snarling vamp leaps on-screen that things start to fall apart. The tap-to-shoot mechanic makes blasting undead hordes to dust a wierdly unexciting event, while auto-targeting and being damn near invincible results in anything approaching skill or strategy going out the window. You can also dodge by swiping the screen, but will hardly ever need to.

Boss battles, which should have been the highlight of the game, also suffer from control woes. Namely an almost completely hands-off style of play, where all you’ve got to do is follow onscreen arrows with your finger to pull off some stylish swordplay. This lacklustre approach to these swashbuckling sections unfortunately sucks any sense of excitement or indeed achievment from Boss encounters, and ultimately means you’ll begin to dread them for all the wrong reasons. 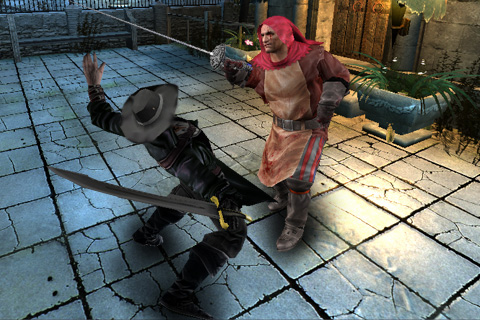 Puzzles too are mindnumbingly non-complex, most usually boiling down to find that key or pull this lever side-quests. Others have you dashing from A to B to set in motion predictible chains of events, for example trapping an unkillable beast by locking a few doors or chanting from a book of spells to banish a ghoul that stands in your way.

There are however some brief flashes of brilliance that save Vampire Origins from, ahem, sucking completely. Loading times between screens are damn near non-existent, a neat addition that lets you use a magnifying glass to scour areas for hidden items such as health potions or weapons looks cool and works well, while a few frantic chase sequences successfully break up the monotony. That said, the bad outweighs the good and with a premium price-tag of $6.99 (roughly) three hours of tedious monster mashing is hardly great value for money.

Overall Vampire Origins is a prime example of style over substance, but lower your expectations sufficiently and the game is still a decent enough stab at squeezing a console quality horror game onto iPhone. Betcha it would look bloody fang-tastic on an iPad too.

iFanzine Verdict: A flawed masterpiece if ever there was one; Vampire Origin’s unwieldy controls, dreary boss battles and slight running time mean it lacks the bite to become a true survival horror classic.

Score: 6 out of 10
Type to search or hit ESC to close
See all results