Quick on The Draw

Noticed a lot more Super Marios, phallic-shaped space-ships and other crudely doodled oddities on iPhone of late? Well it’s Sketch Nation Shooter that’s to blame. With a core idea so simple, yet perfectly suited to the iPlatform, it’s a small wonder no one beat Engineous Games to the punch; Sketch Nation puts the tools at your disposal to create your very own mini-masterpiece of gaming within minutes.

So if you’ve ever loaded up the latest doodle game and thought to yourself “pffft, I could do much better”, now’s your chance to prove it. Then again if a penis-ship doing battle with an army of Italian plumbers sourced from Google images is the best you can come up with, don’t worry, you’re in good company! But that’s the beauty of this game creator- it’s only limited by your imagination, or indeed lack of it.

What you’re actually buying with .99 cents(!) is not one game, but the ability to turn out as many of your own as you can dream up, along with a one-way ticket into the (sometimes twisted) imaginations of your fellow iPhone gamers via Facebook. This means for its paltry asking price, Sketch Nation is a deal, a steal, the motherflippin’ sale of the Century (well almost), but it also makes this title an incredibly difficult little app to review, given that in the time it takes to type this sentence a vast array of fan-made games will most likely have sprung into existence. 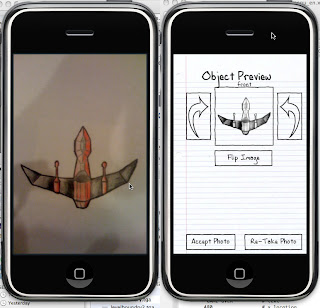 With this in mind, I tried to focus primarily on the title’s own, pre-bundled merits. Presented with an easily navigated interface that recalls any number of doodle games with its sketch-pad style and felt-tip fonts, you have the option to either play or create. Choosing play gives you access to a selection of sample games – ranging from a top-down sci-fi shoot ’em up to a trippy underwater adventure – that showcase Sketch Nation‘s game engine in action and provide inspiration for designing your own shooter.

With those creative juices flowing, it’s time to jump into the game making wizard. My first attempt resulted in a rudimentary blaster starring, you guessed it, Nintendo’s beloved mascot and some, er, one-eyed monsters. Hardly original, or very clever, but what really impressed was how easy it was to put together a game – it only took ten minutes!- and how much fun I had along the way.

Working with the wizard in simple mode is just that- magically non-complex. Just doodle a character and some enemies and hey presto! your creation is ready to played and shared with the world (although copyrighted and/or potentially offensive material is, understandably, a big no-no and will be instantly rejected by the devs, so keep your filth to yourself!).

My second attempt, using the game’s advanced creation mode, was a far more ambitious undertaking. As this option allows for a greater level of customisation and control over your game, letting you tailor almost every aspect of the shooter to your own specifications.

Again importing your characters is a breeze (be it from your photo library, a drawing app or by scanning and syncing your own artwork with a PC), while the added ability to tweak gameplay aspects such as, enemy AI and behaviour, weapon types, power-up placement etc, etc, to your heart’s content makes for an incredibly satisfying few hours of tinkering around. In addition you can also design levels from the ground up, using your own pictures as the backdrop, fine-tune the soundtrack, or even add a cinematic flourish with a hand-drawn intro-screen.

Ultimately though Sketch Nation‘s longevity will be decided by how much you enjoy dabbling in the game creation side of things, because to be honest the fruit(s) of your labor will, beyond the cosmetic, play out pretty much identically to each other, and if I’m honest they aren’t actually all that impressive from a technical stand point.

Making the games is far more enjoyable than actually playing them then. But if you’ve got a artistic bone in your body, I challenge you not to be utterly absorbed by the creation process and filled with an over-whelming sense of pride and child-like glee when a friend (or another member of the already vibrant SNS community on Facebook) puts your game through its paces.

Okay, so the end result will only ever be a variation on a generic shmup. But then again this is called Sketch Nation Shooter, and if it’s the smash-hit it deserves to be, hopefully we’ll see a whole lot more ingenuity from Engineous Games. Imagine, Sketch Nation Platformer, Sketch Nation Racer, even, whisper it, Sketch Nation FPS…

iFanzine Verdict: The doodle game to end all doodle games is also ironically the one that will launch thousands. This is the very definition of a must-have, a title with an almost infinite potential for fun.

Score: 9 out of 10
Type to search or hit ESC to close
See all results