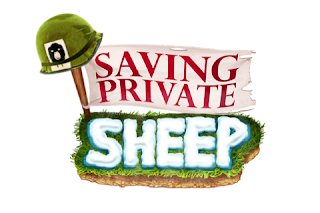 Have you ever watched Steven Spielberg’s multi-oscar winning WW2 movie, Saving Private Ryan, and thought to yourself: Wow, this is great, but what it really could do with is some sheep? No me neither, and perhaps that’s why we don’t work for Bulkypix.

In terms of utterly bonkers ideas, loosely retelling the Allied and Axis conflict and replacing the main players with wolves and sheep rates pretty highly. Yet somehow it also makes for an enormously enjoyable and raucously funny physics based puzzler.

An intro movie, complete with authentic scratchy print and, er, parachuting sheep, sets the scene- with the shepherds gone to war, hordes of ravenous wolves have descended on the pastures and are picking off our wooly friends one by one. Deciding enough is enough, a flock of unusually heroic fluff balls band together to bring the fight to the enemy.

Bulkypix certainly hasn’t been sheepish when it comes to taking inspiration for their latest from a number of high profile Appstore hits; Saving Private Sheep‘s cartoony presentation and zany sense of humour is pure Angry Birds, while the explosive puzzling mechanic recalls Ragdoll Blaster. Yet rather than follow the herd and churn out another identikit game, they’ve put an interesting spin on things by bringing an abundance of new ideas to the table.

Using your finger, your mission is to help the titular Private S. Ryan reach dry land in one fleece, sorry, piece. Each level is strewn with obstacles that must be destroyed by tapping them so our hexagonal hero can roll to safety.

This may sound like a fairly simple task, but stages are played out on dangerously narrow platforms meaning pin-point accurancy is required to avoid Ryan plunging to his doom (i.e. the snapping jaws of the wolves waiting below). Levels are also played against the clock so quick thinking is a must; while exploding the least number of obstacles possible adds an additional layer of complexity.

As you delve deeper into enemy territory puzzles get progressively more difficult as increasingly inventive structures and new types of destructable (and indestructable) objects are introduced to the proceedings. Ice-blocks need to be double-tapped before they shatter, iron girders are immovable, crates of explosives can result in instant death or be used to your advantage and so forth.

This means strategy comes into play, as you must figure out the best way to approach a potentially explosive problem…quickly mind, the clock’s ticking. You’ll also sometimes have to save multiple sheep as Private Ryan has brought a few clones along for the ride!

Bulkypix randomly pull an excellent gameplay switcheroo, whereby, rather than saving Ryan, wolves disguised in sheep’s clothing must be knocked off the edge instead. (Hint: When is a sheep not a sheep? When it’s sporting pointy ears and razor sharp teeth of course!). This brilliantly unexpected variation on the central mechanic helping keep the title feeling fresh over the course of its 80 levels.

Overall SPS is an excellent addition to the physics puzzler genre and is easily as good, if not better, than its lauded inspirations. The puzzles strike the perfect balance between being fun and posing enough of a challenge to hold your attention, while striving for better medals means the game has plenty of replayability value.

Yet it’s the hilarious attention to detail, such as wolves popping up every so often licking their lips and brandishing knives and forks, or UFO’s abducting cows from fields in the background, that helps SPS stand out from the crowd and imbues it with an irresistibly madcap sense of fun. Openfeint integration is the cherry teetering atop this expertly crafted puzzler.

*Having achieved a resounding victory this time around, Bulkypix have promised additional level packs will become available via in-app purchasing. Oh, and these wooly warriors will be marching onto iPad very soon too!

iFanzine Verdict: Atten-shun! If you enjoyed Angry Birds or the Ragdoll Blaster games (and who didn’t?), Saving Private Sheep is going to be your new favourite physics puzzler.

Score: 9 out of 10
Type to search or hit ESC to close
See all results