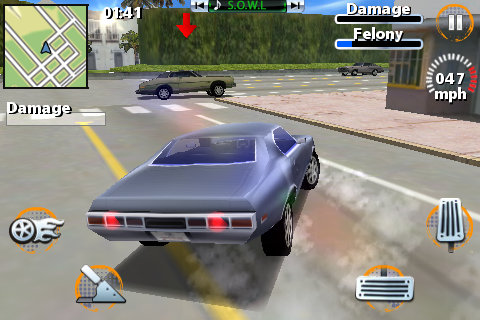 Gameloft’s forthcoming Driver remake is an enhanced port of the PlayStation 1 classic. So expect a more linear, mission based experience than that of the sandbox world of Gangstar: West Coast Hustle, with a focus on in-car action and cinematic cop chases rather than the go anywhere, do anything style of more recent titles.

That said, Driver was (and is) an amazing game, and one that’s responsible for spawning a generation of 3d crime-sims such as Rockstar’s Grand Theft Auto series, so when it screeches onto on iPhone/iPod Touch should be a 100 mile an hour trip down memory worth taking.

Judging by these screenshots Gameloft have given the ten year old title a much needed graphical makeover, and added their now familiar choice of control set-ups (accelerometer, directional pad, or analogue stick). Early hands-on reports also indicate that changes will go beyond the cosmetic, with the game’s legendary difficulty level being tweaked, and new in-mission save points and a directional arrow for ease of navigation being included. 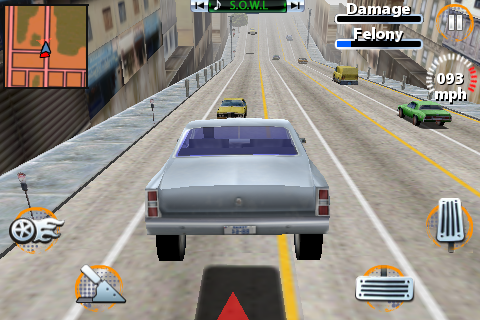 While these improvements are welcome, hopefully the wonderfully cheesy seventies soundtrack and cut-scenes survive the transition to iPhone/iPod Touch.

A la the 1999 original, the action will span four major American cities – Miami, Los Angeles, San Francisco, and New York – and, notably, each of these cities is larger than the entire map in the aforementioned Gangstar: West Coast Hustle. Overall Driver 2009 looks to be shaping up nicely and I’ll definately be taking the title for a test drive when it rolls into the Appstore later this month.