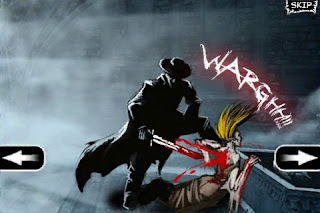 Chillingo have just been in touch to let us know their long awaited survival horror romp Vampire Origins has just been submitted to the Appstore. Playing as Vincent, a vampire hunter out for revenge on the monster that murdered his beloved (and anyone else who gets in his way natch), the game promises to deliver a bloodthirsty blend of story-driven hacking, slashing and shooting.