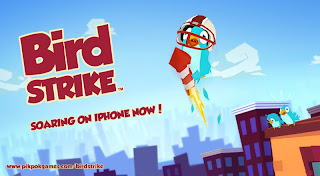 I Feel the Need…the Need for Seed
If pop-culture’s taught us anything it’s that birds are our friends. Big Bird helped a generation with their ABC’s, Tweety Pie kept a nice old lady company, Donald Duck, despite never wearing pants in public, was by all accounts a nice guy. All good, right? Wrong. My opinion? Birds are nature’s little vandals – I mean c’mon, if they’re not pecking their way into our milk bottles then they’re pooping on our heads from a height. But don’t worry PikPoks got ’em pegged; portraying our feathered “friends” here as the power-line twanging, property destroying, UFO bothering little blighters they truly are.

Playing out much like a souped-up and (whisper it) cuter Doodle Jump, Bird Strike catapults its plucky protagonist – the sensibly named Gerald (think the Twitter bird re-imagined by Pixar) – into a fast-paced, accelerometer powered, aerial adventure.

Each level starts with you launching little Gerald from his power-line perch with your finger, then guiding him onwards and upwards through an obstacle course comprised of iron girders, clothes-lines and bunches of balloons by tilting your device. The aim of the game is to climb as far as you can whilst munching the grains of seed scattered throughout these vibrant environments. Gerald isn’t the world’s greatest flyer so staying in the air is achieved by hitching a lift on a series of handily placed rockets.

Rockets give you a brief boost, propelling Gerald a short distance. If you lose momentum or collide with an obstacle Gerald gets knocked out of the air and begins to plummet downwards, frantically flapping his adorable liccle wings, and you must quickly grab another rocket before our feathered friend becomes considerably less adorable street pizza.

Along the way you can also make use of a selection outlandish power-ups such as football and viking helmets that allow Gerald to smash through obstacles unharmed, an umbrella for some Mary Poppin’s style floating, a jet-pack and more. As you work your way through the game’s four areas things get progressively more difficult as you have to contend with air currents, less rockets, and more obstacles (including some ginormous sea-gulls). 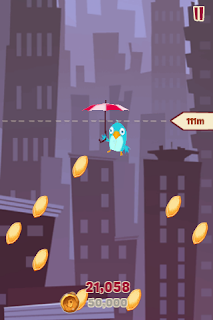 Supercalifragilisticexpialidocious
What goes up must come down, however, and thankfully Gerald’s descent is as much fun (if not more) as his ascent. Once you reach the highest point of levels your avian adventurer gets zapped by an alien ray-gun and sent hurtling back down to earth. As he re-enters the planet’s atmosmosphere he’s transformed into a glowing, green ball of destruction, the aim here to smash through those obstacles you were avoiding on the way up and munch any seed you might have missed.

It’s in later levels that Bird Strike comes into its own though, shrugging off that tiresome Doodle Jump comparison, and starting to feel more like a puzzle-cum-platform game, with quick thinking, skillfull tilting, and tactical usage of rockets and other power-ups required to conquer these tricky stages and earn medals.

All in all, Bird Strike is an absolute blast; its wonderful sense of fun, charming central character and gorgeous, cartoony graphics helping the game to rise above any similar offerings on the App Store. A dizzying selection of bonus modes and extras, including leaderboards to be climbed, OpenFeint achievements and an infinitely enjoyable endless mode, mean that this freshly updated edition of Bird Strike really is worth its weight in gold. 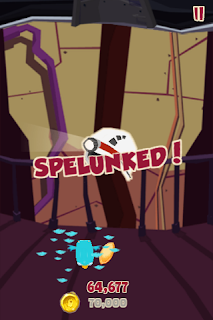 iFanzine Verdict: Bird Strike scales new heights of ridiculously entertaining one-trick gameplay and obsession forming addictiveness. So much fun I actually had a hard time putting it down long enough to write this review!
Score: 8.5 out of 10
Type to search or hit ESC to close
See all results