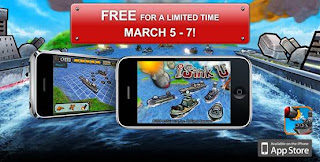 Artificial Life have racked up some mightily impressive download figures (8.3 million and counting!) and to celebrate will be holding a “get-paid-game-for-free” promotion starting from March 5th. Talk about spreading the wealth!

The first freebie to hit the Appstore will be the critically acclaimed battleships game, iSink U. The game which was recently featured by Apple in the new and noteworthy section of iTunes will be available at the unmissable price of nothing from March 5-7 only.

Artificial Life haven’t yet revealed what other games will be given away as part of this promotion saying only that they will be some of their top-rated and most-downloaded titles. But considering these guys are behind the likes of Spartacus: Blood and Sand, Pandorum and the bloody brilliant Adult Swim games, this is exciting news indeed.