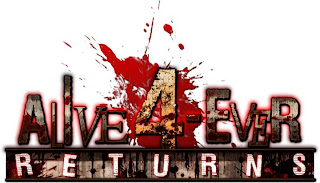 Smash-hit dual-stick shooter Alive 4-ever is getting sequalised. The critically acclaimed gore-fest is returning early next month with an all new cast of clichéd zombie fodder – Asian schoolgirl, check. Burly jock, check… you get the picture – to choose from, a classic horror setting in the shape of a creepy island (tropical paradise this ain’t) and, of course, some bigger, meaner and uglier monsters for you to blast your way through!

Developer Meridian has released some tasty tid-bits of information along with an epic trailer to help whet your appetite for a second helping of shooter-cum-rpg action. My trigger finger’s itchy already…